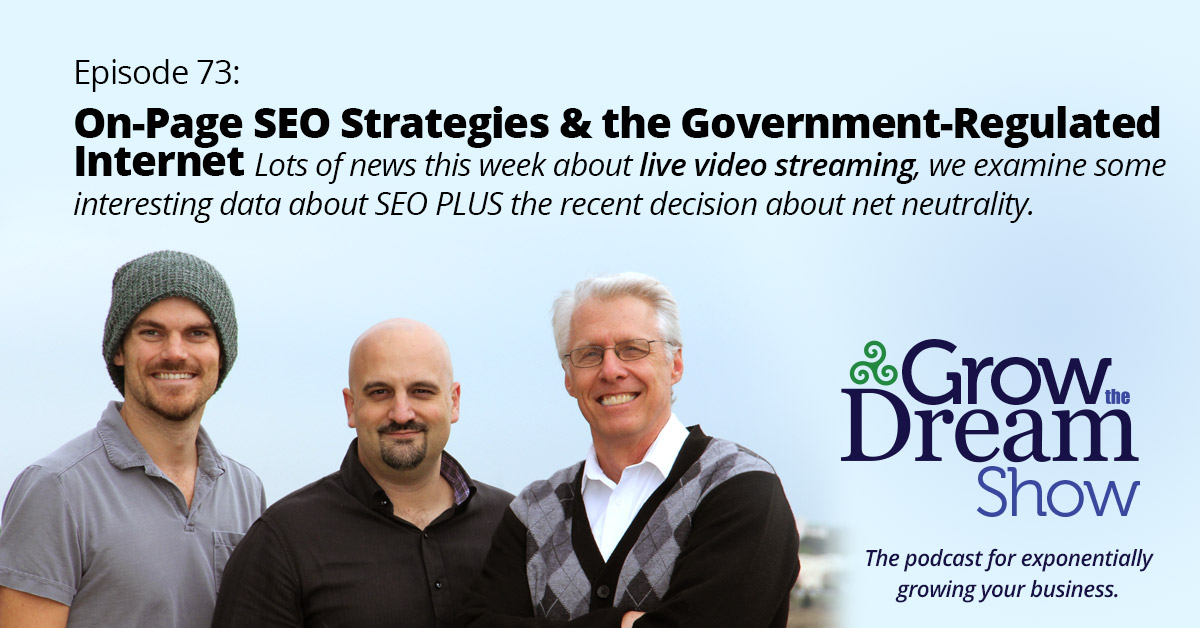 A federal Appeals Court ruled 2-1 that the Federal Communications Commission can regulate the internet like it does your local utility. The idea is to keep quasi-monopoly internet companies from offering different speeds to different providers based on their willingness to pay for it. Basic capitalism, in one sense, but giving the “big guys” an advantage over the “little guys,” in another sense. The big risk is that this opens up the internet to more and more intrusion on any number of issues by government regulators. Bottom line: Looks good on this ruling, but much risk down the road.

We also discuss the results of a data study by ahrefs.com suggesting at least a very high correlative relationship between backlinks and referring domains and SEO results. In fact, those relationships are in the neighborhood of five times higher than domain names and titles. This is connected to the concept of latent semantic keywords. Bottom line: Write good content for human beings.

A federal appeals court ruled that internet service providers will be treated like utilities, subjecting them to government regulation. Much of the narrative about this case was focused on net neutrality, as the lower court had ruled that “…Internet providers such as Verizon and Comcast to obey federal regulations that ban the blocking or slowing of Internet traffic to consumers,” as reported by the Washington Post.

Should some big players be allowed to pay for “fast lanes” so their content is delivered more rapidly than other companies who can’t afford to pay for faster speeds? How would this affect small websites?

Another big question: should the government be allowed to regulate the internet at all?

A recent study published by ahrefs originally featured the title, “On-Page SEO is Dead.” While they backed away from the click-bait title, the results of their study are pretty interesting. Exact-match keyword usage in many of the recommended “on-page SEO” tactics may not produce as much benefit as certain other factors, including good backlinks.

The study did not evaluate latent semantic indexing and the presence of keywords other than “exact match” keywords in the sites that they evaluated.

All of which brings us back around to the simple fact that we need to serve our readers (“customers” for our content) well. On that note, The Sales Lion published a great article on how to do keyword research without any keyword tools which helps us focus our efforts on what customers want.

Twitter recently announced the Engage app for iOS devices, which provides a wealth of information and analytics about your Twitter followers. Android users are left out, for now.